skip to main | skip to sidebar

All Gave Some...Some Gave All 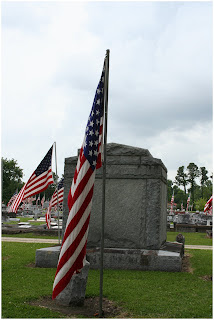 It's Memorial Day. Sydney and I took our four girls to the Avenue of Flags. It is a collection of hundreds and hundreds of large casket flags that have been donated or loaned by the families of deceased Veterans.

Did I mention yet what a great country we live in?

This past weekend, I rediscovered the Billy Ray Cyrus song, All Gave Some...Some Gave All. I'm sure I heard the song when it came out, and I remember when they used it in an episode of Doc, starring Billy Ray. But after watching Hannah Montana with the princesses on Saturday, I stumbled across that song, and it's been on my heart and playing in my mind since. Of course, I checked out the original video for the song on YouTube, and several people's renditions of it with patriotic themes.

I LOVE THIS COUNTRY! We live in the greatest nation on Earth! God has blessed America. But, freedom isn't free. It costs blood and treasure. It has cost hundreds of thousands of men their lives. That sacrifice brings such gratitude to my heart. Thank you to the widows and sons and daughters and all who long for those who will not return home. We appreciate your sacrifice!

I know war and death is not glamorous. But evil lurks then lashes out and such requires a response of force to defeat it. The United State of America has been an agent for justice and good. Oh, we have erred and caused some injustice. But we punish our own when we fail to live up to the good. While far from perfect, my declaration is that I am for America because She is for right! Pray that America continues in what is right.

Just ask Jesus. My freedom from sin and death was costly. It cost Jesus his life. The Father experienced the ultimate Memorial Day...when Jesus laid down His life for the sins of the world.

All Gave Some...Some Gave All. Some came through for the Red White and Blue and some had to fall. If you ever think of me [a vet named Sandy Kane], think of all your liberties and recall...Some Gave All

Posted by Paul Pettefer at 10:21 AM No comments:

Hope for the Hokies

I've had an easy life.

No grand story of suffering at the hands of evil-doers. No epic battle leaving me bruised and scared.

Yet sin left it's mark on me...death, a crushing blow from which there is no earthly recovery.

Tonight I was reminded again of the Hope that is stored up within me. A hope that knows no bounds and never runs short of power. That Hope is in Jesus Christ, the One who paid my debt and rescued me from sin and death!

I read Louie Giglio's blog tonight (http://www.268blog.blogspot.com/) about the recent on-campus worship service recently at VT. There is mighty power to influence in the depths of suffering. Lord, use the junk of this sinful, broken world to stir up the hearts of the hopeless. Use us to shine your Marvelous Light into dark places, to break loose the chains and set free the captives!

There is none like you, Jesus!
Posted by Paul Pettefer at 1:05 AM No comments:

Lift your eyes and look to the heavens: Who created all these? He who brings out the starry host one by one, and calls them each by name. Because of his great power and mighty strength, not one of them is missing.

Coolest Things of the Day...

Paul Pettefer
I'm just a regular guy who's been overwhelmed by an Indescribable God! So I'm wanting every moment of my life to count for what matters the very most. This results is me owning a business, learning to smoke some really good BBQ and making more and more friends as I share it with groups, large and small, and modeling a lifestyle of engagement because of Jesus via www.theCityShouldBeDifferent.com.

I have been so influenced by Louie Giglio and the Passion movement (and its predecessor). Passion for the Glory of God leads us to commit "All For His Fame." Louie used that declaration in signing a letter, and I have now adopted it.